Portland and Chicago saw more violence and vandalism over the weekend during protests. In Portland, protesters detained and repeatedly beat a man, while police in Chicago dealt with assaults from protesters. The mayor of Chicago, Lori Lightfoot, praised the CPD for their rapid response.

Protesters in Portland pulled a man out of his car and brutally beat him over the weekend. In footage released on social media, the man attempts to leave the area in his truck. However, both he and his female friend are accused of misconduct and attacked by protesters. Protesters smacked the man in the head, and one tackled the female to the ground.

The man and woman then attempted to leave, entering his vehicle and driving off quickly. Harassment from the crowd appeared to make him lose control, though, and he crashed into a light pole shortly after. The man is then removed from the vehicle and detained by the angry crowd, which began to question and intermittently beat him.

The video ends with the man being roundhouse kicked in the side of the head by a protester and falling to the ground.

Andy Ngo, a journalist covering the protests, summarized the incident by saying the “mob pulled him out & beat him senseless in front of the passenger. He’s bleeding & unconscious. No police.”

Assaults on Police in Chicago

In one video, a group forms in front of a line of police downtown. In what appeared to be a coordinated move, several of the protesters unfolded umbrellas, covering themselves, and began to make a tight formation. One unnamed individual then lunged into the police line, sparking a massive push by the crowd into the police.

During the altercation, one individual began wildly swinging his skateboard at a police officer’s head. The officer sustained non-critical injuries. Authorities later identified the skateboard-wielding man and arrested him.

The demonstration downtown left 17 officers injured, along with two protesters. The city has seen a recent escalation in the intensity of its protests, with heavy looting marking last week’s activities. 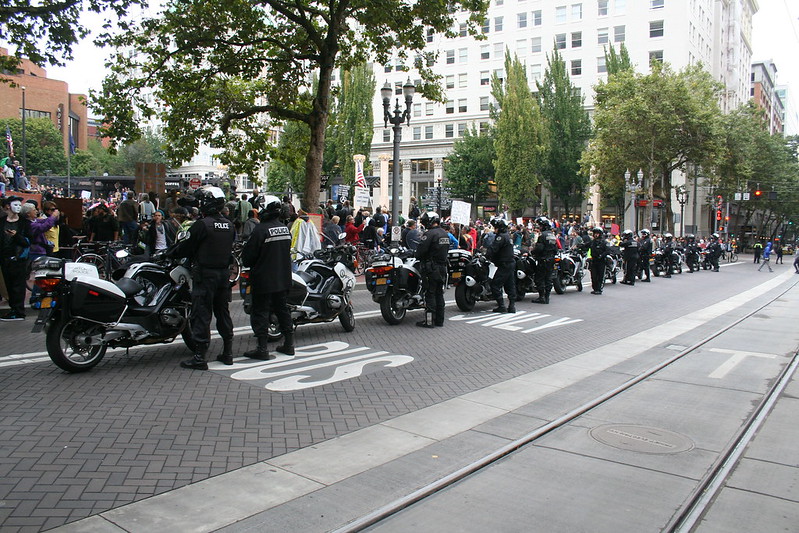 The mayor of Chicago, Lori Lightfoot, offered praise for the police who moved to quell the riots. She said that rabble-rousers  “have embedded themselves in these seemingly peaceful protests and come for a fight.” She added that the skirmish was “over very fairly quickly because our police department is resolved to make sure that we protect peaceful protests.”

If Lightfoot is any indication, the liberal mayors of these cities are coming around to the need to nip violent protests in the bud, especially before elections in November. While much of the country has moved on, destructive protests persist in some major US cities. The residents of these cities have grown tired of the violence and lawlessness that they’ve had to endure, and anti-police rhetoric rings hollow during such a chaotic time.